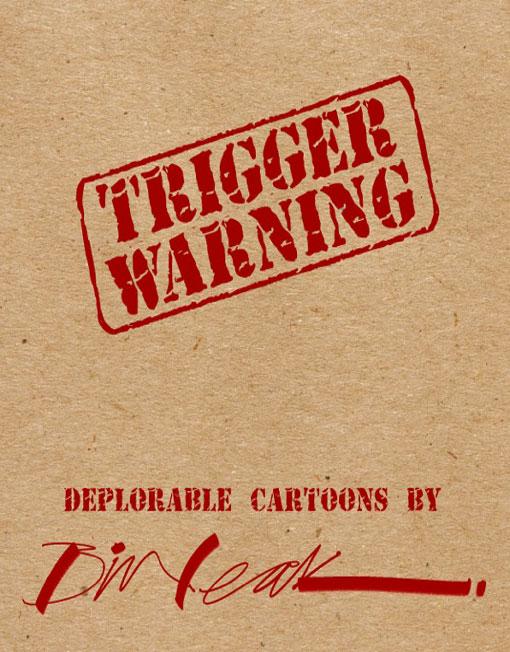 Two days after giving this speech Australia’s greatest provocateur, cartoonist Bill Leak, died suddenly of an alleged heart attack. With freedom of speech in Australia already under savage attack, his passing is a great loss for the country. Sometimes called racist, even homophobic, he was none of these things. He was exactly where he should be, on the splinter lines of a fracturing country. A superb artist, magnificent draftsman and an indefatigable eye for all that is going  so badly wrong in the Great Southern Land, he will be greatly missed.

When I met the great cartoonist Bill Mitchell about 34 years ago, he said, “Mate, a cartoonist only has to be funny once a day, but it’s a lot harder than you’d think.” He was right, but he had no idea how much harder it would be for me than it ever was for him.

For a start, for Mitchell to come up with a cartoon, all he had to do was take a serious political issue, exaggerate it to the point of ridiculousness, then draw what he saw when he got there. But I can’t do that because the ideas our politicians come up with these days are utterly ridiculous to begin with. And if you’re starting at the point of absurdity, where do you go from there? I mean, what am I going to have to come up with to make teachers in the Safe Schools program look ridiculous when they actually start giving jobs to gimps? And how long do you think it will be then before some gimps’ rights campaigner accuses me of gimpophobia? It’s only a matter of time.

Another reason the job’s so much harder now than it was for Mitchell is because, unlike him, I can’t just breezily assume people are looking at my cartoons hoping to get a laugh. Ever since conceptual art supplanted transcendent art, all art has been reduced to the level of graffiti. And to people reared on postmodernism and cultural relativism who can’t tell the difference between Picasso and Banksy, I’m not a cartoonist drawing cartoons for a newspaper; I’m an artist exhibiting his work in a gallery that gets hundreds of thousands of visitors through the doors every day. And the work of a man like that has to be taken very seriously indeed. It has to be analysed. It has to be deconstructed. It has to be decoded by these people in a search for hidden meanings. And because art, like political activism, is a form of therapy, it’s supposed to reinforce and confirm their prejudices, not challenge them.

Well, bugger that. Political correctness is a poison that attacks the sense of humour. Luckily for Mitchell, it was tipped into our water supply at around the time he retired and, since then, it’s infected an awful lot of people. As the senses of humour of people suffering from PC atrophy, their sensitivity to criticism becomes more and more acute until they get to the stage where everything offends them and they lose the ability to laugh.

For people with chronic PC, feeling offended is about as good as it gets. A good cartoon gives them an excuse to parade their feelings of moral superiority in 140 characters or less, scrawled on the toilet door of social media where every other humourless halfwit who’s seen the cartoon and felt offended too can join in.

Well, I don’t twit, and I don’t face, so most of the time I’m blissfully unaware of all the howls of outrage and indignation directed at me in response to my cartoons — but not always. Two years ago I realised that sometimes I really do have to worry about whether people think my cartoons are funny when I discovered that bloodthirsty barbarians aren’t immune to political correctness and their delicate sensibilities are just as easily offended as those of any precious little snowflake you’ll find in a gender studies faculty at a university. And for your average Islamist terrorist, firing off a few impassioned obscenities on a Twitter feed is no substitute for the sort of satisfaction you can get by hunting down the person who’s ­offended you and chopping his head off.

Then, in October last year I realised there’s another group of people who are just as capable of making life hell for me if they fail to be amused by my wit and artistry. It’s just my luck that causing offence has been made an offence at the same time that taking offence has become fashionable. So now there’s a mob that won’t only punish you if your cartoon offends them, they’ll punish you if it’s ­offended someone else. They may be a little less murderous than your Islamist terrorists, but they’re no less unhinged and dangerous. They’re also driven by the same authoritarian impulse to silence anyone who transgresses against the unwritten laws of political correctness. I’m talking about the thought police at that rogue totalitarian outfit, the Australian Human Rights Commission.

Well, bugger them, too. Thank goodness for deplorables like you, that’s all I can say. I knew I was in the company of fellow subversives, dissidents and weirdos when I opened my remarks with a potentially explosive “ladies and gentlemen” and no one complained.

Now, there are a few deplorables worthy of honourable mention, and they don’t come much more deplorable than my editor-in-chief at The Australian, Paul Whittaker. Soon after the Ministry of Truth sooled its goon squad on to me in October I went to a meeting in his office to find out just how much trouble I was in, how much trouble I’d caused for the newspaper, and what we were going to do about it. Paul understood that the HRC’s attack on me was an ­attack on freedom of speech. There is no greater champion of truth, justice and the Australian way than the Clark Kent of newspapers, Paul Whittaker.

It was also at that meeting where I met, via conference phone, the brilliant, the heroic, The Australian’s Australian of the Year, Tony Morris QC. Tony is a passionate believer in freedom of speech and Australia’s most fearsome warrior in the war on idiocy. And another hero in the fight for freedom of speech that I can’t thank enough for coming — with Tony — from Brisbane tonight is Calum Thwaites, everybody.

Now, a workplace as dangerous as a cartoonist’s studio is no place for wimps and I’d like to thank my incredibly supportive editors John Lehmann and Michelle Gunn. One of them identifies as male and the other as female but I’m buggered if I can work out which one’s got the biggest balls.

Next I’d like to thank our MC for the night, one of my former editors on the Oz and one of my dearest friends, Nick Cater. If one of my cartoons makes you think I’m an extremely clever, funny man, the chances are it’s one that Nick has helped me with. In fact he often helps me so much that, if there was any justice, the Tweety Birds and the Facebookworms would be calling for his head and not mine. If Nick could draw, half the time all I’d have to do is the ­colouring in.

Now, not only should I thank my amazing, beautiful wife, Goong, we all should. It’s not often you go to a book launch and then find yourself, weeks later, still talking excitedly to all your friends about the finger food. When you do, you’ll probably also find yourself thinking about just how much of a lucky bastard I am. Thank you, Goong!

Next I want to thank the Great White shark of Sydney’s intellectual aquarium, Greg Lindsay. Only a few years ago I was too scared to so much as dip a toe into the water. Then, one night, Nick Cater pushed me in and, in defiance of everything Fred Pawle had ever told me to expect, Greg didn’t eat me. And not only did he let me live; he gave me swimming lessons.

Bill Leak wrote his last public speech for the launch of his new book, Trigger Warning, which he delivered at the Centre for Independent Studies in Sydney on Wednesday night. He delivered most of it before he was interrupted by a surprise guest, Barry Humphries’ politically incorrect alter ego Sir Les Patterson. This is an edited version of the speech.