TRAVELS WITH MY HAT: EXCERPTS 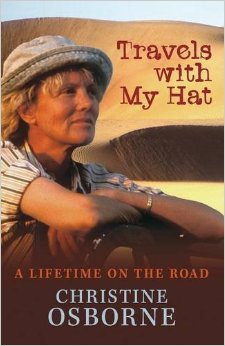 Travels with My Hat: A Lifetime on the Road tells how an Australian nurse become an award-winning international travel writer and photographer. A Sense of Place Publishing is proud to have helped bring this wonderful book to a broader audience.

Here is an excerpt. The year is 1981. The country Pakistan. 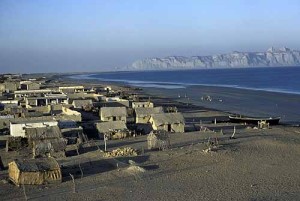 Gwadar as it looked in 1981, Makran Coast of Baluchistan. Pakistan. Picture by Christine Osborne.

Back in Karachi I was booked on a morning flight to Gwadar, a small fishing village on the Makran Coast of Baluchistan. Foreigners were not allowed to visit the area which was ear-marked for development, but Begum Noon had wangled permission from the Ministry of the Interior: a stay limited to just four hours, between flights.

Until Sultan Said bin Taimur sold it back to Pakistan in 1958, Gwadar and district had belonged to Oman, a legacy evident in many Makranis who like people on the Tihama coast of Yemen, trace their ancestral roots to Africa. A Greek admiral, sailing along the coast during the retreat of Alexander the Great, had dubbed them Ichthyophagi (fish-eaters), a name which sticks to this day.

‘Everything eats fish. Even the dogs,’ said the District Commissioner’s driver delegated to whizz me around Gwadar whose sandblasted, mud-walled houses with matting roofs were packed together on a vast bay flanked by hammer-shaped promontories.

Slim, bare-chested fishermen wearing ankle-length lungis were plugging seams on their boats with kapok and shark oil. Others unloaded fish into baskets strapped on camels waiting patiently on the rippled grey-sand beach. The overpowering stench, remarked on by A.W. Hughes in a Gazeteer of Sind in 1876, came from silver carpets of sardines spread out to dry, but curiously there were no seabirds. On the other hand Gwadar swarmed with slinking, swollen-bellied cats.

The one person I wanted to meet on my lightning visit was a Catholic nun who ran a clinic for leprosy patients. I found her in a one-room flat behind the bazaar. It contained only a camp bed, a metal wardrobe and a table on which lay a Bible and an English-Urdu dictionary. 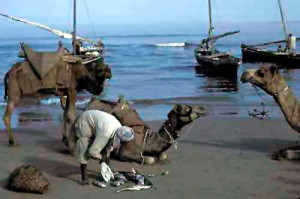 A man loading his fish onto camels on the Makran Coast of Pakistan, Gwadar 1981 Picture by Christine Osborne

‘I intended to stay a year, but like the man who came to dinner, I’m still here,’ said Sister Helen, a elderly bird-like lady originally from Massachusetts.

‘I’ve been here ten years now, but it’s kinda dull and it gets very hot in summer,’ she continued. ‘Will you take tea? Along with soap, dressings and disinfectant, the sisters in Karachi send me a weekly food parcel of tea and jelly jam. Fish? No, I hate it. I eat biscuits, bananas and, once a month, a chicken.’

Sister Helen and a cheerful, bushy-bearded Baluch paramedic cared for 179 leprosy patients registered with the clinic. As Helen was putting drops in the cloudy eyes of an old date farmer, a woman wrapped in a purple chador arrived in a donkey cart. Leprosy had eroded both her hands and toes and I guessed her age correctly, as thirty-five.

‘She is ostracised by her family, so we look after her as best we can,’ said ‘Doctor’ Mehdi, unwrapping dirty bindings revealing a deep, even hole in the sole of her left foot. 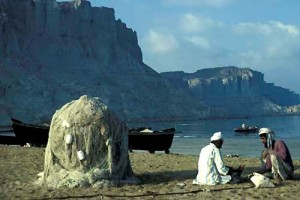 ‘Rats,’ said Mehdi, swabbing the cavity with peroxide. ‘She sleeps on the floor and at night her feet are gnawed by rats.’

I was shocked. Although my flight was due to depart in forty minutes, taking Mehdi with me, I rushed out of the clinic and into the bazaar.

‘Charpai!’ I yelled running past stalls of dried fish, sandy dates, plastic sandals and rotting apples. ‘We must buy her a bed!’

Handing the equivalent of six dollars to a woman with a gold padlock in her septum and with Mehdi clutching the charpai, we sped to the woman’s shack. I unrolled the charpai and Mehdi banged in its legs, but there was no time to fetch the woman to try her new sleeping arrangements: the plane was on the airstrip with its engines running and racing out, I climbed on board.

It was a soft evening beside the Arabian Sea in Karachi. I watched fireflies in the jasmine switching on and off like fairy lights on a Christmas tree. Mosquitoes from the mangroves had not yet driven me inside the Beach Luxury Hotel where I ordered grilled prawns in the garden bistro.

‘Jinga from Gwadar,’ said the waiter.

‘I’ve just been to Gwadar,’ I said, but he obviously didn’t believe me.