SHE SAID SHE SAID EXTRACT IN THE SUNDAY MAIL IN BRISBANE 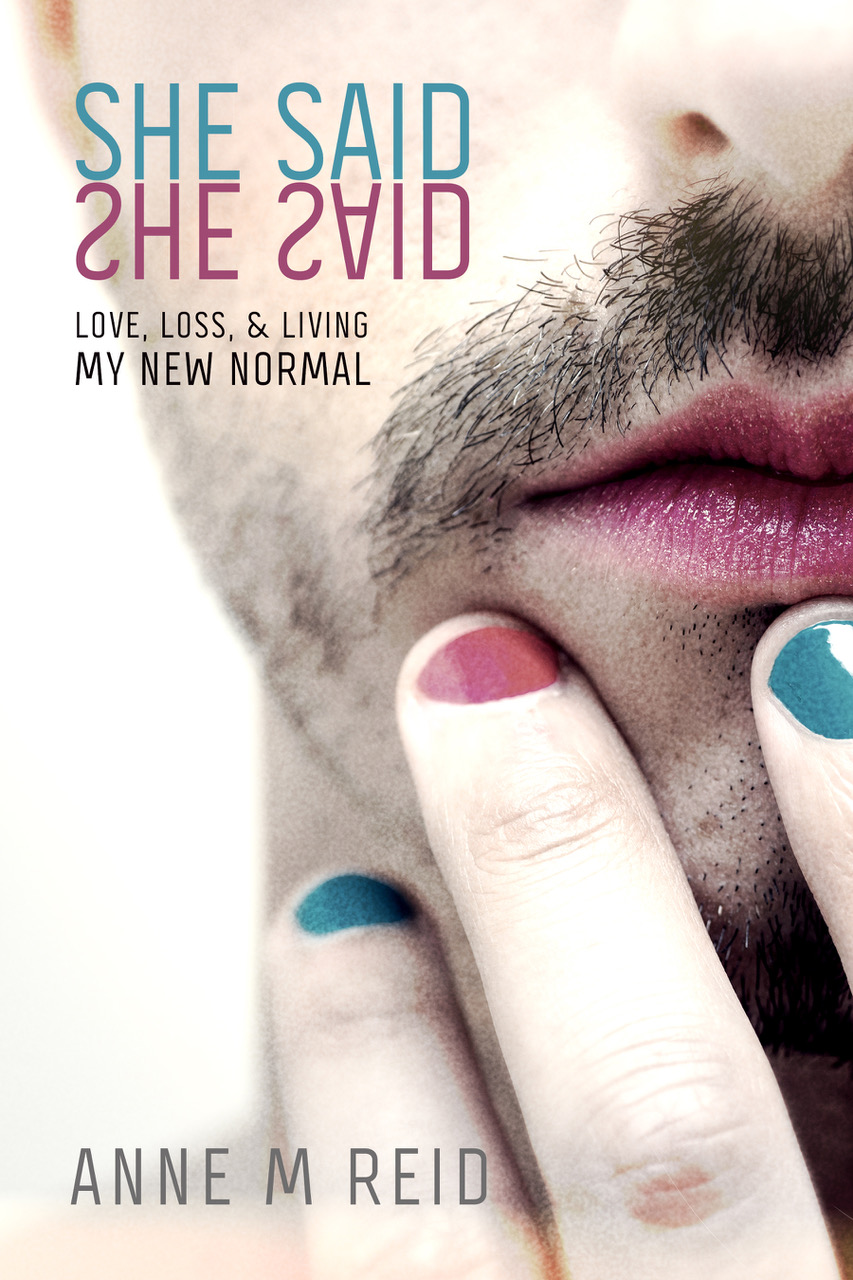 When your husband of 12 years says he’s a woman, what do you do?

WE met in Queen Street Mall in broad daylight. I was able to see him without the nightclub haze or beer goggles I had probably been wearing at the Caxton. He was shorter and stockier than I remembered. Not much taller than me … Paul obviously worked out. He was very muscular. He was blue-eyed, pleasant looking, blondish, with a very short haircut. Not really my type — but hey, here I was taking a risk. We had coffee at a cafe on Albert St. We chatted. We kept chatting (or perhaps he did more of it) for hours. We ended up having dinner and continued to chat, until it was quite late (by Brisbane standards) and time to drink hot chocolates and return home … Friday afternoon. Too many late nights had done me in, so I planned an early night. Paul rang me at work. “I know we are meeting Sunday, but just wanted to know if I could take you out for dinner tonight?”

I was too tired, but succumbed to having a beer beside the Brisbane River. This led to two beers. Again, lots of chatting. My resolve to have an early night was eroded by a rumbling tummy and good company, even though he had admitted his nerdish proclivities. We sauntered over to Eagle St Pier and had dinner at Pier Nine, a renowned seafood restaurant at the time.

After a lovely dinner and perhaps a wine too many, Paul offered to drive me home and I gratefully accepted. We arrived at my house and he walked me to my door (or front steps, as I lived in a highset Queenslander cottage). I was determined he was not going to kiss me. I was taking a risk, but I had no intention of taking a fast risk. He leaned in for a peck on the cheek. I’m not sure what happened, but it ended in a full-on pash and a fireworks connection I’d never experienced before. Paul ended up in my house and staying the night. I had never felt such a passionate connection to anyone before. It was totally unexpected. I was convinced that Paul felt exactly the same.

Who on earth could I speak to about this? Who would understand? Who had life experience to draw upon? Was this something I would have to tackle on my own? I didn’t know who to speak to. I didn’t want to tell anybody I knew. I started to look into online chat sites and websites for some advice, some voice — hidden away from “real” people.

What I discovered seemed to be from two very disparate groups. There was the group of bitter wives and partners: angry, embarrassed and eager to get away from the man who had betrayed them — so fully and irretrievably. Although I’m not sure, it seemed that this group’s members were older than me. There was advice on how to put items away prior to filing for divorce: making sure bank accounts were emptied, property titles squared away, a stash of gift/cash cards bought as part of the grocery shopping to avoid suspicion. There was a lot of anger towards the costs associated with electrolysis, wardrobe buying, plastic surgery, waxing, manicures; considered a right by the transitioning female — but as a luxury by the wife, often denied due to family finances and commitments. These wives were angry, and justifiably so. But their bitterness seemed toxic to me.

At the other extreme were those who appeared to be totally accepting — so totally that the wives discovered a latent lesbianism or bisexuality. They were able to fully embrace the transitioning female. The relationship continued, with a simple change of heterosexual to lesbian or pansexual relationship. This group seemed younger than me. There also had been early signs of androgyny, cross-dressing or feminine tendencies in the trans woman; so the revelation wasn’t a total out-of the-blue, punch-you-in-the-face, unexpected type, like I’d experienced.

I felt I fell somewhere in between. I fitted at neither end of the spectrum. I was angry, but not bitter. I was still loving, but not fully accepting. I felt in no way any desire to become a lesbian, nor to explore my sexuality beyond what I knew it to be. I have spoken to enough gay people to know that one doesn’t simply “choose” and one can’t simply “change”.

Noel asked Paul one day, “Daddy! Are you upset by us calling you ‘Dad’?”

“Well then,” Noel says, “we’ll work out another name for you.”

This troubled me. It would be too confusing to have two parents named Mum/Mummy. I was Mummy. I earned the name. The title. The prestige of being Mum. I liked being Mum and was proud of it. It was mine. It was earned through all the years of periods, pregnancies, breastfeeding, mastitis, vomit, explosive diarrhoea, sleepless nights, reading and researching childhood maladies, preparing nutritious meals, stroller-pushing, kid-wrangling … I had postponed my career progression, my life, for the role of being Mum. It had become my career.

The kids gave it some thought and then came up with the name Maddy. It was a good compromise — and, as a combination of names, preferable to Dummy. We were to find out later that “Maddy” is fairly common among trans mummies. I could not help being impressed with Noell’s empathy — this was outstanding for a 10-year-old. I was a proud Mum. Millie started referring to us as “my mother, and my other mother”, and this caught on with

With the renaming came a more consistent re-gendering. The kids became adept at using the correct name and pronouns (she, her) but it was far more difficult for me to make the switch. Paula was irked when they used the incorrect title, and encouraged them to address her properly, as she was terrified of being outed in public.

As the kids made the change it was about time for me as well. I tried my hardest, and started off by calling Paula “Paulie”, a pet name for Paul that I had used often in the past.

Paula became more relaxed after the renaming and more comfortable at home. I noticed a striking change in how Paula sought solace: within the family rather than on chat sites and Slack forums, messaging and emailing other transgender people.

I was glad. I detected a palpable closed-mindedness among the trans community. It was an echo chamber. Self-righteousness supporting self-righteousness. Selfishness multiplied. Transition appeared to be a holy grail.

Whatever might hold it back, shunned. Excluded. Denied. Ridiculed and chastised. I could clearly see that mutual support was necessary but the community was so exclusionary.

With renaming, Paula seemed more focused on the wellbeing of the family. And more specifically, on my wellbeing. I finally felt I was seen and considered. After months of feeling so completely powerless, so trodden down and overrun, I was finally being heard. It was about time. My recent life had been miserable. There had been a very clear correlation: as Paula’s happiness with the situation increased, my happiness decreased proportionally. The trans tide seemed to be held at bay. I was hoping to see it recede, give me time to catch my breath and to restore equilibrium in my life …

Noel and Millie take part in an enrichment program at the University of Virginia and we travel to Charlottesville each Saturday so they can attend. On one day, as I go to the bathroom, I exit the stall to see Paula enter the bathroom. We do not make eye contact. We do not speak. This is awkward. This is something I am going to have to get used to.

I see a mother of a boy attending the program. She looks so familiar but I can’t place her. We chat, and realise that our boys were at preschool together.

We do a bit of catching up, and I talk about my impending trip to Australia to see my family. I mention that my sister is travelling at the same time. Paula walks past and says something to me. As she walks away, the mother asks, “So. Is that your sister?”

Not my proudest moment. She is bewildered. I am appalled at what I said.

I want to hide under a rock somewhere.

To me, Paula looked like a version of my former husband. It was difficult for me to address her properly or to use the correct name and pronouns. Paula asked me if I could see her as a woman. I found this difficult — to me she was a weird hybrid. Of course, I was very reluctant to let go of my husband. I did not want him to go away.

Paula did have several features in her favour. She was not too tall — topping out at around five foot nine — and had small feet for a man. She was tall for a woman, but did not tower above people. Height frustrates tall transgender women, and nothing can help them, short of radical surgery. When any female is over six feet tall, people tend to notice. If they want to wear heels with a very large shoe size, then this can be very obvious.

Paula was lucky to not have an Adam’s apple. Those with a protruding Adam’s apple have it removed during a trachea shave (or thyroid cartilage reduction), which is a surgical procedure. Paula had a full head of hair — any receding hairline and thinning hair could be reversed for Paula with hormone medication. Many trans women need wigs or hair transplants if the effects of testosterone have already led to hair loss. Paula grew breasts with the hormones. Some trans women have breast implants.

It is extremely difficult to reverse, mitigate or soften the effects that male growth (fuelled by testosterone) has had upon anatomical and physiological development. Defining a waist, softening face lines, removing hair, becoming more “rounded” and less “angular” are desirable alterations.

A deepened voice is one of the first giveaways for a trans woman, even if they convincingly present as female in every other way. Voice coaching or training can assist. Paula received voice lessons online with a speech therapist in Florida.

Voice coaching is not merely limited to raising the pitch of a voice; intonation and resonance are as important. Variation in language expression can differ dependent upon the language being spoken. When speaking, women tend to be more expressive in their language and vary their tone. They use different expressions in non-verbal and body language. These are skills that trans women need to learn.

Some male-to-female trans people have voice surgery. The procedure is known as vocal folds shortening and advancement of anterior commissure (VFSRAC), feminisation laryngoplasty (or voice feminisation surgery). This shortens the vocal cords with the aim of raising voice pitch. Recovery requires a whole month of silent recuperation, with absolutely no talking, throat clearing, or even coughing. This is difficult, and nigh on impossible for a work situation. The surgery is not always successful, but many are willing to try.

I missed hearing Paul’s voice. Paul’s voice had a soft but deeper timbre and I found this particularly soothing when we were apart and speaking on the phone. I also missed the “big voice” that would bring the children to attention. Immediately. Although there was definitely less need to use loud voices to gain attention as our household became calmer during the process of transition.

This is an edited extract from She Said She Said: Love, Loss and Living My New Normal by Anne M Reid. Available from April 8. A Sense of Place Publishing. RRP $29.95. Digital formats $8.95.