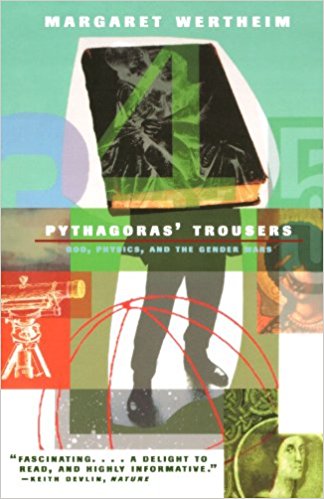 Centuries after Ada Lovelace, the world’s first computer programmer, contemplated the relationship between science and religion, and decades after Carl Sagan did the same in his exquisite Varieties of Scientific Experience, physicist-turned-science-writer Margaret Wertheim offers perhaps the most elegant and emboldening reconciliation of these two frequently contrasted approaches to the human longing for truth and meaning.

Wertheim is the creator of the PBS documentary Faith and Reason, author of deeply thoughtful books like Pythagoras’s Trousers: God, Physics, and the Gender War and The Pearly Gates of Cyberspace: A History of Space from Dante to the Internet, and cofounder of The Institute for Figuring — “an organization dedicated to the poetic and aesthetic dimensions of science, mathematics and engineering.” In her intellectually invigorating On Being conversation with Krista Tippett, Wertheim recounts how she moved away from the Catholic faith of her childhood and toward science, while maintaining a nonreligious sense of spiritual curiosity.

This text has been extracted from that essential newsletter Brain Pickings, courtesy of the brilliance of its founder Maria Popova.

In discussing her beliefs, Wertheim offers one of the most luminous conceptions of what secular spirituality stands to offer in the modern world, especially for those of us who hold dear the values of science, and how a deeper sense of resonance with the universe can elevate and ennoble human life:

I don’t know that I believe in the existence of God in the Catholic sense. But my favorite book is the Divine Comedy. And at the end of the Divine Comedy, Dante pierces the skin of the universe and comes face-to-face with the love that moves the sun and the other stars.

I believe that there is a love that moves the sun and the other stars. I believe in Dante’s vision.

And so, in some sense, perhaps I could be said to believe in God. And I think part of the problem with the concept of, “Are you an atheist or not?” is that our conception of what divinity means has become so trivialized and banal that I think it’s almost impossible to answer the question without dogma. And … I’m very, very saddened by the fact that militant atheism has become so to the fore of our society — I think it’s destructive and unhelpful, and I don’t think it does science any service.

One way I think we can understand the God question in relation to science is this: that prior to the coming into being of modern science, [in] the Christian conception of God, God had two functions — God was the creator of the universe, but he was first and foremost the redeemer of mankind. And with the coming into being of modern science, God’s position as redeemer got shoved into the background, and all of the questions and the public discussion became about God the creator. And that was why Darwinism was so critical — because [Darwin] appeared to challenge the idea of God as the creator of man. And we, I think, [in] the modern West focus so much on the debate about the creative function of God that, outside of theological circles, we don’t seem to be able to discuss, as it were, the concept of redemption… And I think we need to be able to discuss that… We need to start thinking about that.

THE BEAUTIFUL MATH OF CORAL

Margaret Wertheim leads a project to re-create the creatures of the coral reefs using a crochet technique invented by a mathematician — celebrating the amazements of the reef, and deep-diving into the hyperbolic geometry underlying coral creation.

This marvelous talk was presented at an official TED conference, and was featured by their editors on the home page.

ABOUT THE SPEAKER
Margaret Wertheim
By masterminding a project to model a coral reef armed only with crochet hooks, Margaret Wertheim hopes to bring some of the most complicated mathematical models embodied in our universe into the minds (and hands) of the masses.