MERCHANTS IN THE TEMPLE: INSIDE POPE FRANCIS’S SECRET BATTLE AGAINST CORRUPTION IN THE VATICAN 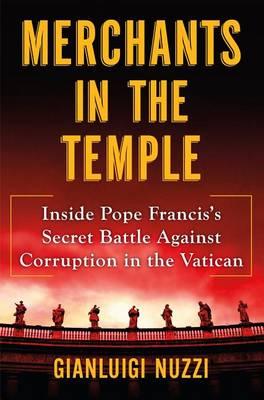 Citing emails, minutes of meetings, recorded private conversations and memos, Merchants in the Temple paints a picture of a Vatican bureaucracy entrenched in a culture of mismanagement, waste and secrecy. Pope Francis has repeatedly and publicly warned the Roman Curia against engaging in “intrigue, gossip, cliques, favouritism and partiality” and acting more like a royal court than an institution of service. Last Christmas he delivered an infamous dressing down of his closest collaborators, citing the “15 ailments of the Curia” that included living “hypocritical” double lives and suffering from “spiritual Alzheimer’s.” The book details how at a designated time each year, Catholic parishes worldwide take up a special collection known as St. Peter’s Pence, funneling tens of millions of dollars to the Vatican with the aim of aiding the poor and needy. According to confidential files obtained by leading Italian journalist Gianluigi Nuzzi, rather than going to aid the poor, most of the cash is used to pay salaries and plug deficits at the Holy See. There is a “black hole” in the St. Peter’s Pence fund, and only a small portion of the cash makes it to those who need it most. Rather, the book documents lavish spending habits, mismanagement and a lack of accountability suggest the offerings are emblematic of larger problems within the ancient city-state in Italy.

The Vatican’s broader lack of transparency and mismanagement of finances, Nuzzi writes, so enraged Pope Francis shortly after the start of his papacy that he offered these stern words to a gathering of top members of the Roman Curia, the powerful bureaucracy of senior clerics that runs Vatican City:

“Our books are not in order,” he said, according to an apparently secret recording of the meeting. “We have to clean them up.”

“Holy Father … There is a complete absence of transparency in the book-keeping both of the Holy See and the Governorate,” five international auditors wrote to Francis in June 2013, according to Nuzzi’s book. “Costs are out of control. This applies in particular to personnel costs, but it also extends elsewhere.”

The book cites a memo listing six priorities when the commission began work, starting with the need to get a handle on the Vatican’s vast real estate holdings. Nuzzi cites a commission report that found that the value of the real estate was some 2.7 billion euros, seven times higher than the amount entered onto the balance sheets.

Rents were sometimes 30 to 100 percent below market value, the commission found, including some apartments that were given free to cardinals and bureaucrats as part of their overall compensation or retirement packages. The book says that if market rates were applied, homes given to employees would generate income of 19.4 million euros rather than the 6.2 million euros currently recorded, while other “institutional” buildings which today generate no income would generate income of 30.4 million euros.

The second priority on the commission’s list was to get a handle on the management of bank accounts for the Vatican’s “postulators,” the officials who spearhead candidates for sainthood. The process — which involves painstaking research into the “heroic” deeds of saintly candidates and the search for miracle cures — has always been steeped in secrecy. Nuzzi estimates that the average price tag for a single cause is around 500,000 euros and has gone as high as 750,000 euros for one beatification. Funding comes from donors eager to see their candidate honoured. Causes that inspire wealthy donors get lots of funding, poorer causes get little — and often get stalled as a result. After the Vatican’s saint-making office told the commission it had no documentation about the postulators’ funding or bank accounts, the commission had the postulators’ accounts frozen at the Vatican bank, Nuzzi said.

The Vatican on Monday described the book as the fruit of a grave betrayal of the trust given by the Pope, and, as far as the authors go, of an operation to take advantage of a gravely illicit act of handing over confidential documentation.

“Publications of this nature do not help in any way to establish clarity and truth, but rather generate confusion and partial and tendentious conclusions,” the Vatican said.

A Sense of Place Publishing, Gianluigi Nuzzi, Merchants in the Temple, Pope Francis