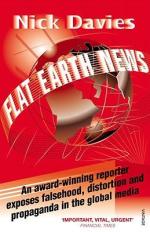 For those of us who once loved newspapers, and despair at the current state of the media, Flat Earth News is at once insightful, fascinating, and, of course, utterly dispiriting.

When award-winning journalist Nick Davies decided to break Fleet Street’s unwritten rule by investigating his own colleagues, he found that the business of reporting the truth had been slowly subverted by the mass production of ignorance. He concludes: Original, truth-telling journalism survives at the margins and commonly tends to be overwhelmed by the consensus account, whether true or false. What we are looking at here is a global collapse of information-gathering and truth-telling. And that leaves us in a kind of knowledge chaos, where the very subject matter of global debate is shifted from the essential to the arbitrary; where government policy, cultural values, widespread assumptions, declarations of war and attempts at peace all turn out toe be poisoned by distortion; where ignorance is accepted as knowledge and falsehood is accepted as truth.

He uncovers the story of the prestigious Sunday newspaper which allowed the CIA and MI6 to plant fiction in its columns; the newsroom which routinely rejects stories about black people; the respected paper that hired a fraudster to entrap senior political figures; the newspapers which support law and order while paying cash bribes
to bent detectives. Davies names names and exposes the national stories which turn out to be pseudo events manufactured by the PR industry and the global news stories which prove to be fiction generated by a new machinery of international propaganda.

With the help of researchers from Cardiff University, who ran a ground-breaking analysis of our daily news, Davies found that most reporters, most of the time, are not allowed to dig up stories or check their facts – a profession corrupted at the core. Finally, Davies presents a new model for understanding news.

You can see the patterns…the arbitrary and the irrational replacing real judgments; the casual recycling of unreliable claims; and the structural bias towards the political and moral beliefs of the most powerful groups in society. This last point is worth dwelling on for a moment, because this is the subject which so often persuades outside critics of the media to guess that there must be widespread conspiracy. There is sometimes conspiracy. But it is building on the power of these rules of production: the selection of safe facts and safe ideas; te power of the electric fence; the aversion to context and subtlety; the obsessive recycling of the stories which other media are running; the succumbing to moral panic.

The whole thing is crazier than that. It’s more like watching a mouse being thrown into a washing machine. Anything can happen to frail fragments of information as they are hurled from hand to hand, whirled through a clash of conflict needs – do what the others do, be exclusive, steal other people’s exclusives, sell papers, sell a bunch of second-hand ideas, save money, make money, make friends, hurt enemies, hype it, ramp it, tweak it, match it to a picture, match it to a space, splash it on the front, bury it inside. This isn’t a conspiracy. It’s just a mess.

I started with the millennium bug, with the simple idea that the main reason why journalists produce stories which contain falsehood, distortion and propaganda, is that they don’t know the truth themselves. Then I began to see the scale of this Flat Earth news.

Nick Davies is a freelance journalist, working regularly as special correspondent for the Guardian. In the last few years, he was centrally involved in the publication of secret US logs and cables obtained by Wikileaks and in exposing the phone-hacking scandal in Rupert Murdoch’s newspaper empire.