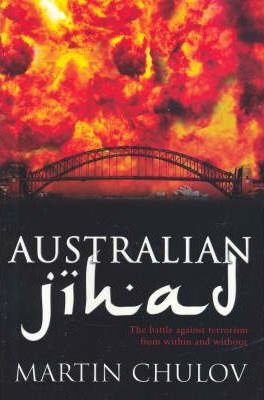 The best book ever written on jihad in Australia, by the supremely gifted journalist Martin Chulov, remains an under-reviewed and under-appreciated work.

As Chulov writes, Australia has been far more central to the international jihad movement than previously realised; and this book is a significant player in bringing that to light. Australia, despite its geographical isolation has been played a curious role in the development of jihadist philosophy. Two of the Islamic States greatest propagandists, Musa Cerantanio and Neil Prakash, who both achieved worldwide fame and were particularly popular with IS fighters on the front line and are both now under arrest, come from Australia.

With legal suppression orders following Operation Pendennis and the 2005 planned attacks on the Melbourne Cricket Ground, Australian Jihad: The battle against terrorism from within and without, was withdrawn. For many years copies were almost impossible to find. A book which, far from being suppressed, should have been taught in the schools and universities and been mandatory reading for every politician thrumming the drumbeat of terror.

A barrister claimed the book could prejudice the trial of his client, although the basis for the book was previously published news stories from the national newspaper The Australian, where Martin Chulov then worked.

It was not a book that the Australian bureaucracy, slaves to the state creed of multiculturalism, wanted in the public domain.

A news story in The Sydney Morning Herald recalls what happened, and that even the reasons for the books withdrawal or who was asking for the suppression could not be revealed.

The Victorian courts, with their reputation as the most left wing in the country, issue more suppression orders than any other jurisdiction.

Attempts to keep the Australian public ignorant of what is going on in their own current are an unfortunate feature of Australian governance.

Fears of prejudicing terrorism trials have forced publishers to recall a controversial new book on the terrorist threat to Australia.

“We’re withdrawing the book for the period of these ongoing terrorism trials,” Pan MacMillan said in a statement.

“We absolutely stand by the accuracy of the text and the integrity of the author.”

Pan MacMillan spokesperson Annie Coulthard today said the publisher had received legal advice not to reveal the details behind the recall.

The publishers were told not to identify the trials concerned or who, if anybody, had pushed for the book to be removed from sale two weeks after publication.

Those trials are now over and the book is available.

Australian Jihad deserves far greater attention than it has received, and should be compulsory reading for anyone interested in the evolution of Australian society.

Much has happened in the decade since the book was first published.

For its population, Australia has generated more fighters travelling to fight for jihad in the Middle East than any other country. Radical mosques and prayer centres remain a significant point of controversy.

One of the strangest things about the escalating jihad threat within Australia is that it has all been known and written about before.

Far from addressing the foundation issues, politicians have used the excuse of terror to launch universal surveillance on the population, and to pass a barrage of more than 60 pieces of legislation, all restricting the freedoms of the populace and extending the power and reach of the state.

Quelling dissent and controlling the flow of information through extensive manipulation of the media has become the reflexive response of the Australian government.

Yet there has been ample warning that radical Islamic preachers have been stirring up jihad in the Australian suburbs for many years.

Hizb ut-Tahrir, which openly advocates the overthrow of the government and the introduction of a caliphate, giving firebrand speeches in publicly funded town halls and universities, has pointedly refused to condemn Islamic State. It continues to grow in power and acceptance, with everyone from the Australia’s Grand Mufti to prominent Muslim spokespeople, to the Army’s Muslim chaplain to one of the Australian Broadcasting Corporations most prominent Muslim spokespeople all expressing support or refusing to condemn the group.

We have been far more central to radical Islamists’ priorities than we ever recognised – and the radicalism they are peddling took root in Australian society more than a decade ago. The lightning rod of Afghanistan has to a large extent been replaced by Iraq, which continues to have a profound impact on radicalised Muslims in Australia and Southeast Asia. Home-grown radicals are drawing strength from what they see as the anger and suffering of their brethren abroad.

With the catastrophe of Mosul and the brutality of Western bombing imprinted on the minds of the Muslim minority, and the world’s major humanitarian groups claiming Australia, as the second largest contributor to the Coalition, to be guilty of breaches of humanitarian law and war crimes, the propaganda impulse from Western airstrikes and military intervention in Muslim countries continues to resonate, driving recruitment.

The author Martin Chulov has gone on from being a reporter on the national newspaper The Australian to becoming one of the world’s most admired experts on Islamic State, filing his excellent copy for The Guardian as that newspaper’s Middle East correspondent. His interviews with prominent figures inside Islamic State marked  a significant step forward in understanding how the group flourished in the wake of US-led intervention in Iraq, in which Australia played a significant part.

Chulov won one of the professions most distinguished awards, the Orwell Prize for Journalism, in 2015.