ABDUCTION TO THE NINTH PLANET 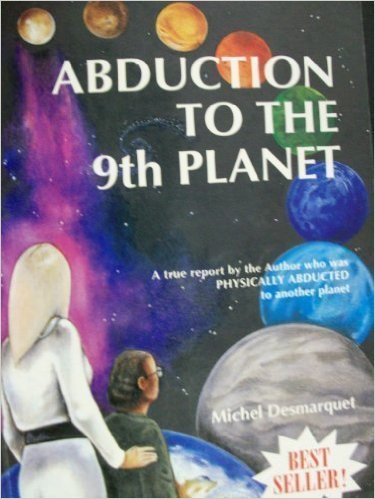 Through an extremely curious series of circumstances, A Sense of Place Publishing encountered Michelle Desparquet, living on an island which he has specifically asked not be revealed. Now in his mid-80s, the author of Abduction to the 9th Planet remains remarkable, even if his first flush of fame has faded. He still displays an ebullent love of life, a fondness for Scotch and a good laugh, is a chess champion in his community, and amongst some of the islanders is regarded as a totem of good luck, someone to be touched or rubbed up against, so that the divinity or good luck which is so much part of him will rub off. He is a kind of living good luck charm. To this day he maintains that the story he told in Abduction to the Ninth Planet is entirely true. What makes a cult novel remains a mystery; time, circumstance, good luck, talent, and other elements intangible, or the world would be full of them. At one time Abduction to the Ninth Planet was outselling The Celestine Prophecy, a book which argued that humanity was gpoing through a fundamental shift in consciousness. Michelle Desparquet still maintins that the story he tells, of being abducted by advanced extra-terrestial beings, is simply a retelling of events which truly happened. With mankind’s knowledge of the universe expanding by the day, the claim that mankind is alone in the universe has come to seem increasingly bizarre.

Michelle writes: “In June of 1987, I was abducted by Extra-terrestial Beings, highly evolved spiritually, and also the most technologically developed in our galaxy. They took me PHYSICALLY to their planet on a journey that had a time lapse of nine Earthly days. It was not an Astral travel, nor an Astral contact – I was there with my Physical Body, incredible as it may seem. By transubstantiation, we traveled through the light barrier, moving in and out of space and time, instead of moving through it. For our physical bodies of course, this is unexplainable, but I witnessed it… We are not the only human beings in the galaxy… This book not only conveys a message I am relaying on their behalf, it contains the most sensational revelations of the century… Amazing revelations on: Our purpose on Earth Reincarnation Life after death Invisibility, Levitation The Big Bang The Bermuda Triangle The Easter Island phenomenon The Great Pyramid as a cosmic tool And much, much more…”

In the Preface the author writes:

I have written this book as the result of orders received and which I have obeyed. Further, it is an account of events that happened to me personally – this I affirm. I imagine that, to some extent, this extraordinary story will appear to some readers as science fiction – a story entirely invented – but I do not have the imagination that such a fabrication would require. This is not science fiction. The reader of good faith will be able to recognise the truth in the message I transmit from my new friends to the people of the planet Earth. This message, in spite of numerous references to races and religions, reflects neither racial nor religious bias on behalf of the author.

And then he quotes the Biblical lines: “They have eyes but they do not see; ears, and they do not hear…